As the War Machine Keeps Turning: The Changing Landscape of Consumer Viewership 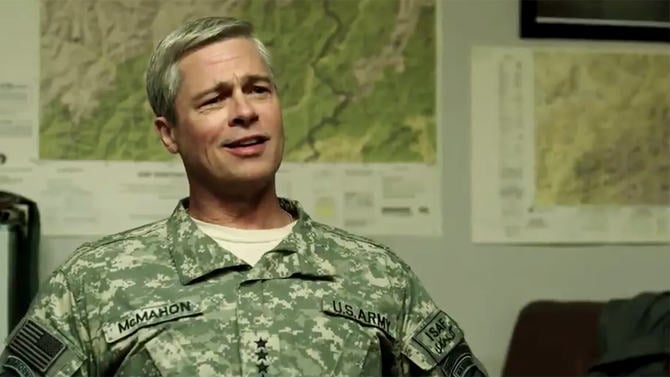 “You can’t make an omelet without breaking a few eggs,” says self-assured General Glenn McMahon (Brad Pitt). He’s speaking to a host of war-weary Afghani villagers U.S. Marines killed of a local boy of their village. This may be the perfect allegory for Netflix’s foray into big budget, star-filled studio films.
War Machine (2017) made its way into the on-demand service this Friday in what is expected to be the company’s new direction for their original films. Due to the nature of this political satire, Netflix may have just been the perfect medium for War Machine. Netflix doesn’t reveal their viewership numbers so the success of this film cannot be determined at the box office.
The film boasts powerful performances from a cleaned-up Brad Pitt, That 70’s Show’s now matured Topher Grace and the ever masterful Sir Ben Kingsley, its greatest performance comes in the form of the commentary it offers on the past political climate of the War in Afghanistan, and American culture in general — no pun intended.

A Study of Character.

General McMahon is the American dream. A soldier’s soldier and a man’s man. He is self-assured, educated, and liked by all.  A model example of what the United States Marine Corps should represent: competence. The problem is this isn’t enough to win wars anymore, which is the main premise of the film. In the twenty-first century, it takes more than an ideological crusader backed by a group of hype men to win the hearts and minds of a country whose civilians view their liberators as invaders. The message, “We’re going to liberate the shit out of you,” doesn’t exactly convey a sense of assured camaraderie. It also takes more than a star-studded studio budget film to win over viewers looking to “Netflix and chill”.
In this light, perhaps it is best that we are able to watch War Machine from the comfort of our couches. We are able to pause and play as we please; to absorb the film on our own terms and draw our own personal conclusions. We can watch the illusion of the American dream take the form of Brad Pitt’s General McMahon, or we can continue binge watching re-runs of The Office. Whichever we choose, the world will still go on — the machine will keep turning. Netflix will keep releasing original films. And America will most likely never stop attempting to win the war on finding the next best stream.
Ultimately, War Machine is a character study of a man conditioned to believe he is — and has always been — the best at what he does.We as Americans have been conditioned to believe since the moment we were old enough to salute the flag. This character study is set during the War in Afghanistan, but this is anything but your classic war movie.

So what’s it about?

Despite a powerful sequence detailing a disillusioned soldier’s faux pas moment of glory, the film fills with comedic beats and an ensemble cast of likable ideologues who like to do what we do: get drunk and travel. What truly brings it all home is the inclusion of the Rolling Stone writer’s voice-over offering commentary that is less subtextual and more heavy-handed. This really makes the film feel authentic in its attempt to capture the essence of American culture. It fails to hit the emotional impact and high-stakes world director David Michôd is reaching for.
Why are we here? Are we making a difference? Who is the enemy? The answers to these questions seem to escape everyone involved in this war except for General McMahon. His fall from grace is a palpable recreation of the current state of the American military, but most importantly, it’s a step forward in understanding the nature of war in the twenty-first century. Can we control chaos behind a gun? Or shall we return to the isolationism that dominated America before World War II? In other words, can we truly help the citizens of the world or should we focus on ourselves first? After watching the film, one might sympathize with the latter.