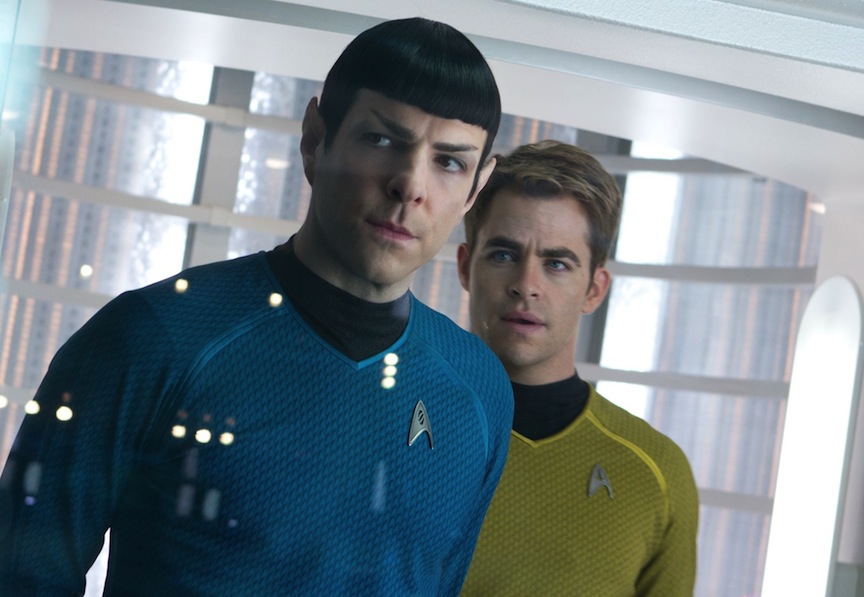 John Updike’s first rule when reviewing novels was: “Try to understand what the author wished to do, and do not blame him for not achieving what he did not attempt.” This is as good a rule for assessing films as it is for assessing novels, and when viewed from this perspective Star Trek Into Darkness is very nearly a complete success. In my opinion, it does almost everything right, and within that rightness screenwriters, and other storytellers, can find at least five takeaway lessons (as always, there are major spoilers here):

Though I did not have my stopwatch out while watching, I’d guess that the main story is not set up until at least thirty minutes in. That, however, doesn’t matter, because the writers (Roberto Orci, Alex Kurtzman, and Damon Lindelof) create tension almost immediately. As long as your characters want something, as long as there is some kind of tension, you can buy yourself time to set up the main story. In this case, Kirk (Chris Pine) loses command of the Enterprise as a result of a report Spock (Zachary Quinto) filed. He, of course, must get command of his ship back—but we know neither when nor how this will happen. This loss also creates tension between Kirk and Spock, and that tension lasts until the next layer of the story is put into place, and that next layer creates an even deeper tension. This layering of tension is accomplished again and again, expertly, throughout the film.

One of the reasons the Kirk-Spock relationship works so well is that, at times, they are not really two characters at all, but two sides of the same character. Kirk embodies the emotional side while Spock embodies the logical, and this allows the internal to be externalized through arguments between the two. This is exploited wonderfully during the first half of Into Darkness especially, during which Kirk is trying to decide whether to send 72 missiles down onto an unoccupied area of Kronos to which a terrorist named John Harrison (Benedict Cumberbatch) has fled. They argue about whether Harrison should be brought back alive rather than killed without a trial, and the ethical consequences of this decision weigh heavily Kirk. The arguments might be entertaining, but the drama lies in Kirk’s internal struggle with the decision he must make.

3. Drama, as Opposed to Action, Lives in the Gray Areas

While it is full of action and adventure and one-liners that work more often than they don’t, Into Darkness is not a simplistic action flick set in space. Such a movie might be fun to watch, but it wouldn’t make you feel much of anything. The world of Into Darkness resembles our world in a way many summer blockbusters don’t, even those set in the here and now, and because of that it is a film with some emotional impact. As mentioned above, this is a world in which simply killing the bad guy is not immediately accepted as the right thing to do. This is a world where our hero might be forced through circumstance to ally himself with the man he was sent to kill. This is a world where that man might be complex and human and, in his way, sympathetic, even after he has betrayed Kirk. In other words, this is a world of genuine drama.

Spock is cold, logical, unfeeling. We know this before the first frame of Into Darkness flashes before our eyes, but it is confirmed again while we watch, and then it is reinforced, so when Spock begins to cry toward the end of the film, we really feel it. These moments when characters contradict what we know of them for dramatic effect—when the non-feeling character cries; when the milquetoast finally stands up for himself against his overbearing boss; when the shy boy finally asks out the girl he likes—almost always work if set up properly, and work far better than they would have had the characters not been set up as they were. They work because they indicate growth and development, and that growth increases the drama of the moment.

5. Set it Up Well and the Audience Will Believe Anything

Kirk dies; Spock cries. It is one of the best moments of the film, and this despite the fact that I was certain Kirk would not remain dead.  I knew this because earlier in Into Darkness John Harrison’s blood—Khan’s blood—was discovered to be regenerative and possibly resurrective (which is, apparently, not a word). As soon as Kirk died, I thought of that blood and its special properties. That might indicate that the setup was heavy-handed, but it also indicates that it worked. When Kirk was resurrected I believed it absolutely because the potential had been set up earlier. This is, of course, Chekhov’s gun viewed from the other end of the play (or, in this case, movie): “If in the first act you have hung a pistol on the wall, then in the following one it should be fired.” And if someone is shot in the second act, someone should be in possession of a gun in the first. These things work both ways.

Star Trek Into Darkness does so many things right that I’m even willing to overlook the lack of a colon in its title. I, for one, will be watching it again.