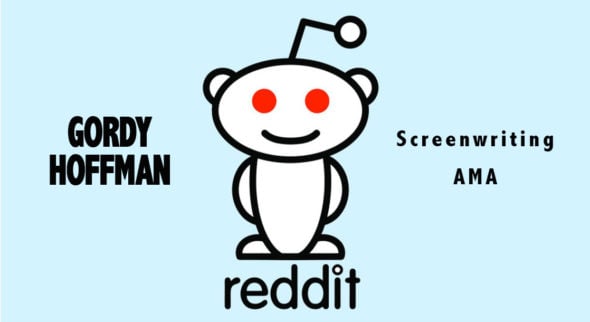 Gordy Hoffman, Founder and Judge of the BlueCat Screenplay Competition, dropped by the Screenwriting subreddit for an AMA on all things screenwriting. Below are some of the highlights from the discussion. The full Reddit AMA can be found here.

The best way to go from being an unknown to a commodity in screenwriting:

Gordy: Write the story that scares you. The one you don’t think is a “real movie.” The story you love but you don’t think will “sell.” The one you think no one will be interested in but makes you emotionally uncomfortable. If you study film history, many breakthroughs come when someone says it doesn’t matter anymore——I have to write this. It’s happened to me and many others. Do not be self-conscious. There’s nothing to figure out, nothing except how to live with yourself and what has broken you.

How to gauge the quality of your work when you are excited about it, but others are not:

Gordy: It’s easy to differentiate! If people are not enthused about your material, that means it’s not ready. And you need to rewrite. It’s a mistake think if everyone is having problems it’s not your responsibility. The practical approach is to assume responsibility for your writing when people don’t get it. Trust that process. The reality is it’s very difficult to write a great feature screenplay. It’s really hard. So let’s embrace that and work on the script. Because that’s the reason you’re stalling, not because people don’t get you. But the best place to start is to write something that you think is wonderful before you even begin, not something you think others eventually will. TLDR: not complicated, we need to write better features.

How to get quality feedback if you can’t afford coverage:

Gordy: You do not need to spend any money to get feedback. You need to learn how to take feedback. When you become better at discerning the note from the feedback you receive, you can get feedback from anyone. But never never pay for feedback thinking that’s only good feedback. Totally wrong. Find fellow writers online that will read it. If their notes provoke a rewrite and you see your script has improved, that’s value. Learn how to take feedback. Don’t think that anyone is an authority on who can give feedback. You might hear this—-don’t listen to those people. Don’t get feedback from that person. Etc. It’s our reaction to feedback that makes or breaks our careers, our scripts. I should write a book on how to react to notes. It’s that important.

Look for feedback anywhere someone will read your script for free or maybe trade a read with them. On this board, Facebook, friends from school, forum in Australia, Instagram……..maybe you overhear explaining what’s wrong with Luke’s arc in Target. That person might be greatest note giver in the world! haha. Keep your eyes open and focus on your reaction to notes.

What makes BlueCat different from other competitions:

Gordy: You have proof we read your entire screenplay. We are transparent about the qualifications of the judge (me.) You know who hires the readers and their qualifications. We give written feedback as a part of the entry fee. The judge is a screenwriter. Long list of accomplished alumni (which a few others have). Named after cat.

What to avoid when writing a screenplay for the very first time?

Gordy: You can’t avoid it so don’t even try. Humiliate yourself. Have no fear. Just write and learn from the pain and horror. It’s kinda funny that you can’t escape writing something confusing, unoriginal, unfunny and unlovely. So just have a laugh with all the rest of us, because when you finally write something that becomes someone’s favorite movie, it’s the best.