The Handmaid’s Tale: A Voice-Over Exception that Works 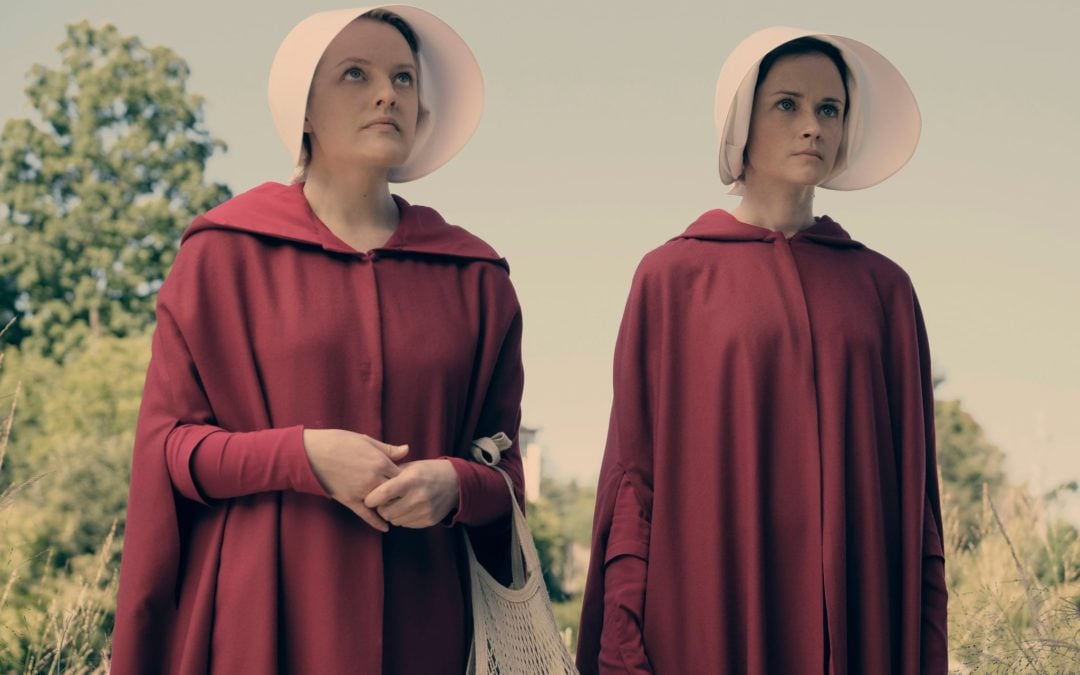 Whether you have taken extensive screenwriting classes or simply read a book or two on the subject, you have probably heard the longtime industry consensus on voice-over narration in your scripts: don’t do it.
Despite this unwritten rule, tons of beginning writers still feel like they’re the exception. Maybe you’ve felt it, too. Your story needs the narration. You’ll master it. You’ll succeed where most people fail. It’s hard not to look at fantastic examples of voice-over like Memento or American Beauty and not be wise to the fact that once in a while, narration can be brilliant and feel indispensable. The latest, most striking example is Hulu’s television adaptation of The Handmaid’s Tale.

Elisabeth Moss plays Offred, real name June, the heroine of Margaret Atwood’s novel. She is forced to be the potential surrogate womb for an infertile couple in a dystopian world where much is forbidden to women. Her first-person narration punctuates certain parts of the show in a way that feels seamless. That’s because, as with every rare case of voice-over that works, it’s highly motivated.
Film and television are visual mediums. The truth is that many scripts forget that. So how does The Handmaid’s Tale manage to sell prose-like voice-over? There are several reasons.

If you’ve read Atwood’s novel, you know that Offred’s story is discovered on tapes she recorded, interspersed with pop music – the voice-over as well as the soundtrack is likely used as a direct, and slightly creepy, nod to the source material.

Like a good flashback or other expositional device, the voice-over clarifies rather than muddles the plot. For example, in the pilot episode, Offred meets with her companion, Ofglen (Alexis Bledel), and goes grocery shopping with her fellow handmaids. We hear the tense, pious dialogue between the women, who cannot possibly voice what they’re really feeling about their situation. Without Offred’s voice-over saying, “I don’t need oranges. I need to scream,” we might not understand whether she has been brainwashed or emotionally defeated. We might see a group of women having polite conversation and not grasp the true purpose of the scene.

The voice-over is sparse. We don’t hear it during flashbacks to June’s life before becoming a handmaid because we don’t need to. And it’s never long speeches that explain every thought in her head or reiterate what we see onscreen. It’s specific information when needed. The voice-over does not telegraph the action, it only complements it.

It’s thematic. This is a story about a woman who could die if she speaks her mind. Her inner life is of utmost importance.

Balance of The Handmaid’s Tale.

In fact, The Handmaid’s Tale might not use voice-over so well if the show wasn’t masterful at silence. Take, for example, the end of episode 5, “Faithful”(spoilers ahead). June seduces Nick (Max Minghella) in an incredibly motivated, layered sex scene that speaks volumes about both characters without a single word of dialogue uttered the entire time. In episode 6, “A Woman’s Place,” the children of handmaids are brought out at an important state dinner, and you see the silent expressions of pain on the faces of their birth mothers. In every episode, there are moments like this, where story and character is strongly conveyed without words.
No matter what kind of script you are writing, you have to be able to achieve great silence before you can use something like voice-over, and even then, it’s only necessary under a very specific set of circumstances. As screenwriting teachers always say, you have to know the rules before you can break them.