A Ghost Story: Suspension of Disbelief in a Supernatural World 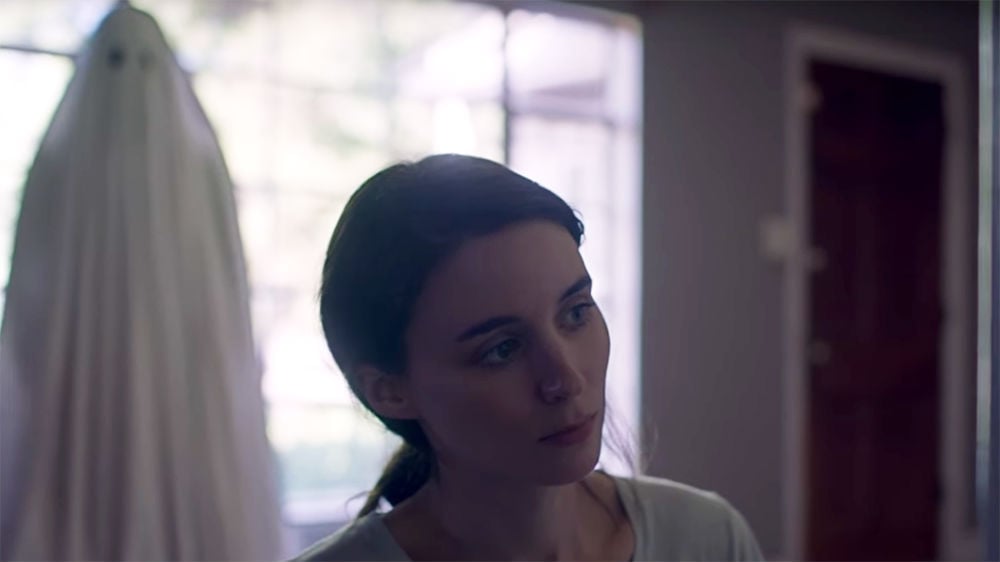 Of all the quasi-thrillers examined in the past few months, A Ghost Story, a film written and directed by David Lowery, typifies the kind of post-modern thriller that has dominated the summer circuit so far. In the same vein as The Beguiled or It Comes At Night, the thrills in A Ghost Story come not from scares that jump out you at unexpected moments, but rather from the existential dread of what happens after tragedy strikes.

The Concept of the Supernatural

In this particular instance, a fatal tragedy strikes Casey Affleck’s character simply dubbed, C. He becomes a ghost with a sheet over his head who goes on an existential journey transcending time and space. He bares witness to M, his former lover played by Rooney Mara. M experiences go from moving on from their love to new tenants moving into their home. Eventually, she experiences the house’s destruction so a bustling futuristic city can be built there. C’s is a journey that undoubtedly requires an active suspension of disbelief on the audience’s part. The concept is an interesting one that deserves to be examined by screenwriters interested in the supernatural.

The first rule of maintaining the audience’s suspension of disbelief is calling attention to how abnormal the action may be. Lowery demonstrates this when C’s ghost pops up awake in the morgue. By doing so, Lowery opens the floodgates to allow anything out of the confines of our perception of reality to happen. At this point, does it matter if C’s ghost looks like an elementary refrigerator drawing? Would we be more inclined to believe the ghost’s validity if it were a CG image? It’s hard to imagine the answer being yes without noting the arbitrary process we use to define what makes for a realistic looking ghost.

Engage the audience within the Narrative

Once the abnormal is established, the action needs to function within the framework of the narrative correctly. This is C’s story; after C’s death, the story is told through the somehow expressive eye-holes of the sheet ghost. Whether we find it absurd or not, we are forced to see things the way he does, and ultimately, to sympathize with him. Although M leaves and many new faces inhabit the house, C is still inextricably drawn to their love — represented by C’s quest to obtain and read a handwritten note M sticks in a crack in a wall. Although C’s story can move at a slow pace, it still engages the audience to root for him through his journey across time.

The film also challenges the audience to think. At the very least, it answers some questions on what — or why — things go bump at night. On a deeper level, it raises some questions about the very drive of humanity. The film’s thematic arc reaches its apex when a prognosticator goes on a nihilistic tirade about the meaning of life. He essentially deduces there is none and the poignancy of C’s tale hits home the hardest.  Regardless of the indelible truth the Prognosticator states, C is still bound to his quest. And his quest, is in turn linked to the note in the wall. By establishing a solid framework the narrative exists in, Lowery allows the absurdity of the sheet ghost to take a back seat to the sentimental journey of C’s life.

Some have called A Ghost Story pretentious and overreaching while others liken it to sprawling epics such as Terrance Malick’s The Tree of Life. Regardless of these opinions, the film relies on a certain social contract that we enter upon watching a film. You may find A Ghost Story goofy and unbelievable, or you may find it endearing and thought-provoking. Whatever you decide, it’s impossible to deny the potency to David Lowery and cast.