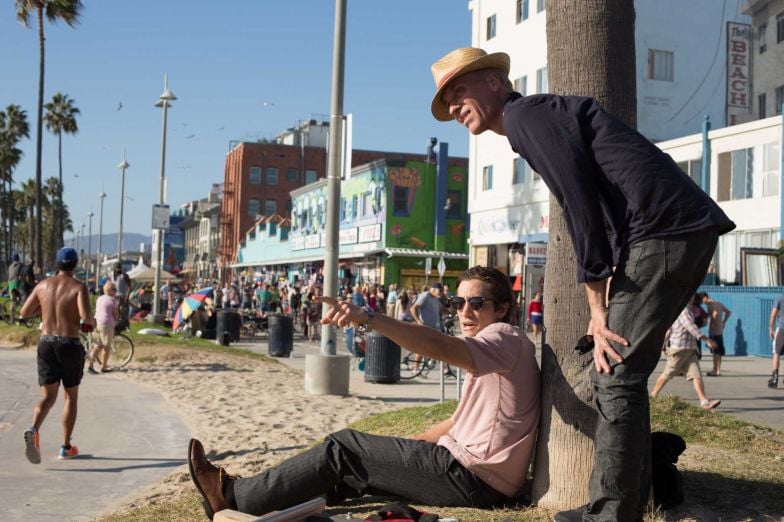 Nightcrawler is the new gritty crime thriller film that opens nationwide on October 31st. We sat down with Dan Gilroy (writer/director of Nightcrawler) and asked him a few questions about his experience as the writer/director:

BlueCat: “Nightcrawler” is really a testament to the beauty of Los Angeles.  What’s your LA love story?  How did you fall in love with it?

Dan Gilroy: I grew up in New York, but my family used to come to Los Angeles for trips and vacations because my father was in the movie business.  I always found it magical here!  I met my wife and moved out here a number of years ago.  What impressed me the most about Los Angeles was the physical beauty: oceans, mountains, Santa Anas, snow on the hills.  I wanted to write a film that had a moral darkness to it that showed Los Angeles in a visually appealing light.

BlueCat: As writers, we can see a bit of ourselves in our characters – what part of Lou do you see in yourself?

DG: I believe you can accurately diagnose Lou as a sociopath, and just as Aspergers and Autism has a spectrum of disorder, there have been articles saying we all have Aspergers or Autistic tendencies.  I try to be self aware, so I believe I don’t have an inordinate amount of sociopathic tendencies but I can see some hints in me that makes me sort of identify them.  I’m interested in the idea that sociopaths are not these rare people that you rarely encounter.  I feel they’re walking amongst us, and to some degree, we all have tendencies that are not dissimilar and on a good day, we’re aware of those tendencies and we counterbalance them.  I think that’s the tendency I see the most in myself.

BlueCat: Emotionally, what was the hardest scene of “Nightcrawler” to write for you?

DG: I do like films that bring out emotion.  Oddly enough, in “Nightcrawler,” there’s not a tremendous amount of emotion.  It operates on a different level, and I would say the emotional effect of the film can be seen when Nina, the news director of the station, is being broken down by Lou in the restaurant.  He’s talking about the wreckage of her career and ultimately proving that she’s a very vulnerable person and open to be exploited.  I felt Nina’s vulnerability when I was writing it.

BlueCat: Do you think “Nightcrawler” ever has the potential to be adapted into a TV show?

DG: I think it has potential to be adapted into a TV show.  It’s a world that would lend itself to reality-based TV; from a narrative standpoint, it could be a fictional show.  It doesn’t intrigue me on any level, because I like to work on projects that feel new.  It’s not something I would pursue, but I don’t think I would encourage other people to pursue it, only in the sense that I like the film we’ve done and I wouldn’t want to have it confused or associated with some ongoing project.

DG: My dad’s a playwright and a screenwriter and makes independent films.  So, I grew up in a household where our father was writing every day.  There was no mystery to being a writer!  It’s just like anything – if you have a father or mother doing a profession, then you suddenly think that’s a legitimate way of living.  When I got out of college, I needed a job, so I got a job as a reporter and reviewer at Variety newspaper in New York.  I realized I loved movies so much that I wanted to try to do what my dad did.  I spent five or six years getting up early in the morning before work writing screenplays, and I wrote quite a few of them.  By the sixth or seventh year, I sold my first screenplay.

BlueCat:  What’s your writing process?  Do you outline?  Do you try to hit a certain number of words a day or page count?

DG: The first step is coming with the idea.  I won’t stand to write anything unless I feel passionate about it.  Once I come up with that idea, I outline extraordinarily and in a very detailed way.  The length of an average outline for me by the time I start writing a script is one hundred pages single spaced.  It’s broken up into bios, dialogue ideas I have, scene ideas I have, backstories, and a structural outline for the film.  If someone had six months to write a screenplay, my advice would be to think about the idea for four and a half months and write for the next six weeks.  Screenwriters rush into writing, but thinking about the idea is the crucial element of the whole process.

BlueCat: What’s your advice for aspiring screenwriters who are hoping to break into Hollywood?

DG: I firmly believe that if you write a great script, you will get noticed.  Hollywood is a vacuum.  For all the doors that close on people’s faces, it’s just a fact that they’re always looking for good material.  If you write a great original script or have an insanely strong character or an idea that no one’s ever thought of, it will not take much to disseminate through Hollywood – like a wildfire!  The advice I would give to people is to not write something if you’re not passionate about it.  This means you have to love the idea and the writing.  This doesn’t mean that you’re not going to encounter problems on certain days and bang your head against the door.  This means that there’s some spark inside you that keeps you going.  When you worry whether or not [the screenplay] is good, that’s actually passion.  If you’re just trying to hit a page count or quota, that’s not going to be good.  It all starts with you being passionate about the idea.