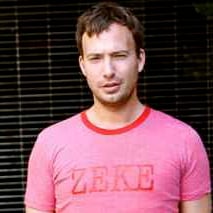 When the last virgin in high school creates a fake girlfriend on Facebook as part of an elaborate scheme to get a real one, the woman whose pictures he stole shows up and his fiction becomes a reality. 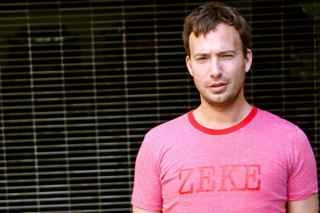 Zeke Farrow won $2000 for his screenplay Untitled Sarah Palin Sex Doll Project, the screenplay so controversial that the title alone made one newsletter subscriber request that we quit sending him newsletters.

Can we get one quick thing out of the way before we get started? Zekeness™, @Zekeness, #Zekeness, /Zekeness.  Okay, I can relax now.   I started writing screenplays in 1999.

Picture it, New York City.  Summer.  Y2K was fast approaching.  Drastic times.  I had been acting in some amazing downtown theater with a radical group of awesome people who are still a big part of my creative life today.  I was a bit of a spaz and more than a bit directionless.  I ran into a friend of mine from college on the subway.  He was going to NYU Film School and asked me to write his thesis film with him.  It was a real movie moment.  My life could have gone in two different directions separated by the heavy-handed metaphor of sliding subway doors.   Just think, I could have ended up like Gwyneth Paltrow.  Luckily I found screenwriting.  I mean, can you imagine the pressure of coming up with content for Goop.com?

I just looked on my active hard drive, the old orange LaCie in my closet, my defunct laptop which miraculously booted, Dropbox, and iCloud, and counted 20 features and a dozen or so teleplays and shorts.  A few of these projects I had totally erased from my memory — swings and misses.  Some of the older concepts are like totally dated.  Others I may revisit one day with fresh eyes.

Well, after my morning Bootcamp™ class, what else am I gonna do with my day?  I read this essay once by some really smart guy who talked about how you can be a Consumer or you can be a Creator.  The more you consume, the harder it is to create.  The more you create, the less you need to consume.  A lightbulb went off in my head.  The less media I consume, the more I will create.  The more I create, the less I need to consume.  I limit my movie watching because it’s important to keep movies special to me.  I like an engaged viewing experience, not a mindless one.  I try to not “zone out” to media.  I could be engaged and writing instead…

Plot.  And it’s silly because plot is the easiest thing to steal and change when you write genre movies, which I often do.  I think it feels stifling to me if I know too much plot before I start.  I usually know the beginning, the middle, the end, and a bunch of fun stuff that could happen along the way.  Some of my best set-ups and payoffs come to me during the act of writing.  It keeps the project alive and thrilling.

(I love how your questions have subtly built-in compliments.  I appreciate them and hope they keep me from sounding smarmy.)

I do well because I’ve put the time in and worked hard to learn how to write.  If you were born with the ability to write perfectly structured, entertaining, original, compelling scripts, then you were touched by angels.  I meet a lot of people who confound their knack for writing quippy Facebook status updates with a preternatural skill for writing screenplays.  It takes just as much practice to be a writer as it does to be a painter, violinist, or ballet dancer.      The practice of writing is like the practice of yoga.  The thought of doing it is romantic.  The motivating to do it is excruciating.  The doing it is challenging, but stimulating.  The having done it is ecstasy.  If you want to get better, you have to practice, and like with yoga it becomes bearable.  I hate yoga and love writing.  You pick your battles.

The cafe where I write is filled with writers and bound by strict rules.  We sit, silently working, for hours on end.  Answering an iPhone call will elicit the wrathful eyebrow of a dozen scribes.  For me, the best moments are when I fall into a writing trance.  The story sort of leaps onto the screen as quickly as it comes into my head.  And suddenly a character reveals something unexpected or says something amazing.  There was one line that a character in one of my scripts said once that was so funny I jumped up, threw an air basketball, and yelled “Two points!”  I’m not kidding.  I ran around the cafe for a round of low-fives from all the other writers.  Is that totally embarrassing?  If it makes any difference, I eventually cut the line from the script.

The biggest problem with storytelling in Hollywood is not enough Zac Efron, though I’m not sure my thoughts on the matter mean much to anyone.  I mean, who do you think I think I am?   But since you asked…

Implicit in your question is an agreed upon deficit in Hollywood storytelling that I can’t get onboard with.  This is what I know:

It’s really, really, really hard to tell a great story.  I see a lot of bad movies, both independent and Hollywood.  I see a few outstanding movies, both independent and Hollywood.  At the end of the day everyone wants to tell great stories. Movies require teams of people, working on multiple story incarnations (script, direction, acting, editing) leaving plenty of opportunity for everything to go terribly wrong..

Some Hollywood films suffer from the compromise necessary to make something that costs 100 million dollars happen.  The result is usually a story with no subtext.  Then again, indie films often suffer from an under-developed script because there are limited resources on the front end of most indie projects.  The unfortunate result is the feeling of subtext where there is none.  If a film has no subtext, I don’t care who made it, there is nothing that will keep me awake.

If I’m going to pay 15 bucks to get lulled into a hypnotic state, it had better be the most vivid and experiential event possible.  So would it hurt people to give me a little subtext?

My greatest fear is always that I won’t be able to figure a story out.  It’s like a constant suspense that keeps me going.  I have to find out how it’s gonna end.  Am I gonna do it?  Or am I gonna fail?

I want to win an Emmy for my Oscar acceptance speech.

Keep fooling myself.  Luckily, I am most happy when I’m alone, typing away at my coffee shop.  And I figure, as long as I keep practicing, I’ll keep getting better.  The rest is circumstantial.  Who knows, someone like REALLY important could be reading this interview like RIGHT NOW. Be on the look out.  Hopefully you’ll get to see more of my movies on the big screen really, really soon.

Oh, and don’t forget to tweet this link and follow me…  Who knows where we’ll end up…