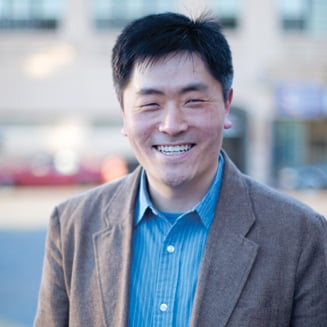 The oldest son of a Korean immigrant family leaves Harvard to manage a Bronx convenience store in order for his younger brother to fulfill his destiny as a world-class violinist.

What up, Ryan? Thanks for entering the BlueCat last year. It was your finalist placement that encouraged me to enter this year.

How long have you been writing, and has your medium of choice always been the screenplay?

I wrote a few movie reviews and articles for my now defunct websites as a hobby. And I had to write lengthy business plans to raise millions of dollars for those same dotcoms. That’s probably where I honed my fiction writing skills. I didn’t try screenwriting until I read an online version of Good Will Hunting in May, 2001.

I tried writing a novel back in 1997. I found out that I was not very good writing descriptions or creating effective inner monologue to show what the characters were thinking. When I read Good Will Hunting, I thought “Oh, the screenplay has everything in it. Lemme try it.”

I used that script as a template to write my first script and fell in love with screenwriting and rewriting. If I could write as well as you, I would be writing novels and poems and haikus and maybe even Hallmark cards.

What movies do you feel have influenced you as a writer?

The two movies I watch over and over for inspiration are Cinema Paradiso and Casablanca. The friendship between the young boy and the town projectionist of Cinema Paradiso set in post-War Italy is very touching. Casablanca is so perfect as a script and a movie. When I was growing up, I watched Star Wars and Mary Poppins over and over to learn English. So I’d say those four movies.

You have a Master’s in Screenwriting from USC. How has that helped you?

If I didn’t get into the USC program, I don’t think I would have made the journey out to LA. At some point, we all have to come out here to break in, especially if you want to go the studio route. I felt that USC would open doors for me. However, I realized that you have to bang your own doors, even if it’s with your head sometimes. I might be bitter because I still have student loans to pay off. Ask me again in 5 years.

Along the way, you met a few working screenwriters who have been very generous with their time and advice — mentored you, really. How did you meet them and have you received what you consider an indispensable piece of advice that you would like to share?

The very first draft of Hyung’s Overture was read by Ryne Pearson, Bill Wheeler, and David Steinberg. They are all successful screenwriters who are in different genres and specialties. After they read the script, they all helped me in their own ways. Ryne wrote my letter of recommendation to USC. Bill gave my script to Sundance folks. David took my poker money every week. With all three, our friendship was forged because they believed in my writing and my scripts. I think that’s a very important distinction to make. Many people hope that they can break in once they have friends in the business. While that is probably true, a good script forms friendships quicker than nights of drinking together.

The one piece of advice they gave me is to not take this business for granted. All three of them work as if their next gig will be the last. I also learned a lot from screenwriters who haven’t quite made it yet. Like a writer who I met five years ago. He became a BlueCat finalist last year and encouraged me to apply. Oh wait, this interview is about me. Next question!

Hyung’s Overture seems to come from a very personal place, and I know it’s one screenplay you have spent an enormous amount of time working on. Care to talk about that?

I began screenwriting as a hobby in May, 2001. I gave up on the dotcom world and moved down to New Jersey in September, 2001. I had a dozen job interviews lined up during the middle of September on Wall Street. 9/11 happened. As a New Yorker, I was very saddened by the tragedy on such a grand scale.

One day, I shut off the TV and began writing a story about a young Korean boy who walks across the elementary school yard to fetch coal for the classroom furnace. Probably because of 9/11, Hyung’s Overture ended up being a story about an immigrant family who arrive in New York to pursue the American dream. They don’t find it but discover something even more magical.

Since I knew little about screenwriting rules and “rules,” I didn’t realize that you shouldn’t write a story about an Asian family that spans 25 years with multiple country locations, two languages, and multiple actors to play the same characters.

What is the current status of the script?

A few months ago, another screenwriting contest announced me as a finalist. From it, I had a chance to meet Teddy Zee who was former President of Overbrook and Davis Entertainment. Since we met, he’s been very supportive of not only the script but of my career. When I told him that I was a finalist of BlueCat, he said, “Win the damn thing and get it read by everyone. If someone else can make the movie, pursue that. I want to help you in any way possible. If not as a producer then as your ‘hyung.’” Hyung means older brother in Korean. Again, this friendship was formed because he connected with the script.

The status of the script is to do exactly what Teddy suggested. I want it read by everybody to generate heat for the script and for me. From there, we’ll see. Already, Gordy Hoffman has been so helpful. Heck, I might start calling him “hyung.”

When we first met, you had a six-month plan. You were giving yourself six months to “make it.” It’s now been five years. Tell me about the six month plan, and also, where do you see yourself in another five years?

Yeah that six-month plan. It flew right out the window when I wrote this script. I knew I wasn’t a good enough writer to do the story justice then. Even now, I wish I had better skills. I think I will continue to have six-month plans, though. Re-evaluate what I did right and what I did wrong. In five years, I hope to be in a position to help other writers and filmmakers the way many, especially those I mentioned today, have helped me.

Thanks for the chat. Are you gonna eat those fries?

These fries are for BlueCat winners, not finalists. Sorry.

Young Kim spent his childhood in Seoul, Korea and his angst-ridden teenage years in New Jersey. In the six years between his BA in Economics from Harvard University and MFA in Screenwriting from USC Film School, Young ran four businesses (three dotcoms and a candy company)… into the ground.

He is a member of the Independent Writers Caucus of the Writers Guild of America. His feature screenplay, HYUNG’S OVERTURE, has been selected into the Film Independent’s 2005 Screenwriters Lab. He also has written, directed, and produced 4 awful short films that will hopefully remain hidden for a long time.