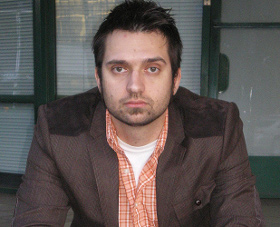 Ryan’s BlueCat entry, The Break-In, tells the story of what happens after a man kills a burglar in self-defense, and elects to leave the body in his bathtub, setting out on an obsessive hunt to discover the identity of his victim, who happens to be his identical twin. A finalist in 2005, the script was treated to a live reading at the High Falls Film Festival in Rochester, New York. On the heels of the release of his latest novel,

Acts of Violence, Ryan was able to spend some time reflecting on his history with screenwriting.

BlueCat: How did you start writing screenplays?

Ryan David Jahn: I wrote a few (unpublishable) novels when I was in my teens and early twenties. Then I got an idea for a screenplay-even before I wrote a word, it seemed like a movie to me-so I wrote one. That led to other screenplays. I’m not sure why. I don’t spend a lot of time thinking about why I do things or what it means.

BC: Could you please describe your experience with BlueCat? How did being named as a finalist and winning Screenplay Live in 2005 help your writing career?

RDJ: I submitted a script. It was a finalist and was treated to a staged reading/performance at the High Falls Film Festival. It was the first time I’d seen anything of mine performed, so it was an interesting, enlightening experience. Words take on a different texture when spoken aloud. I think it’s probably a good idea for any writer to hear his or her stuff read aloud. Sol Stein suggests getting the worst actor you know to read your stuff aloud to you, as a bad actor will be incapable of making bad sentences sound good. This strikes me as a great idea. And since I’m the worst actor I know, I usually just record myself reading and listen back to it.

BC: Any updates on The Break-In?

RDJ: It’s been optioned a couple times, but both options expired. Earlier this year I took the basic premise and the main character and wrote a novel using them. It’s quite different from the screenplay, and not really based on it so much as built from the same raw material. Macmillan will be releasing the novel in July as Low Life, a title more appropriate for this new incarnation.

BC: What is your process in terms of taking a story idea from a thought to an actual script?

RDJ: Usually I just think of an idea and a character, let them float around my mind for a few months, by which time the character has a fuller personality and I have some idea of where the story will go, and then sit down and write. If there are a lot of characters, I’ll write down their names, ages, and their relationships with one another, but I don’t generally write down my plans for a script. Or a novel, for that matter.

BC: How do you combat writer’s block?

RDJ: I don’t know. I go through stretches where I don’t much feel like writing, but then I just don’t write. If you’ve got no deadlines and don’t feel like writing, I don’t see any reason to force the work. Save the Puritan work ethic for the Puritans. “Write every day” only applies-as far as I’m concerned-if you’re in the middle of a project. Otherwise, I see nothing wrong with not doing a damn thing but staring out the window and drinking coffee. But if you do happen to have a deadline, then you sit down write. At that point, it’s not about anything but being a professional and getting the work done. Deadlines and gas bills can be very inspiring.

BC: Where do you find inspiration for your work?

BC: What would you like to be doing 10 years from now?

Our thanks to Ryan for his time. Look for his book giveaway coming soon. In what The Guardian calls “[p]owerful, compassionate and authentic…”, the novel “…works both as a mystery and as a snapshot of America in the early 1960s.” Acts of Violence was released in the UK on November 6th. It will be available in bookstores on December 2nd in Australia, and February 10th in Canada. It is also available worldwide online.