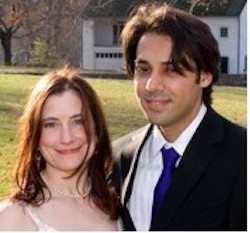 Chet spends his days running down tax dodgers on the neon streets of Las Vegas. But when he's forced to find and arrest his own deadbeat dad, things turn strange.

During Gordy’s last trip to Philadelphia, he reconnected with some finalists from our 2009 competition. Screenwriters Peter K. Hassan and Elisabeth Silverman Hassan put together a table reading of their script, Death and Taxes, with Gordy on hand to watch. BlueCat recently interviewed the writing duo about the experience.

BlueCat: First off, could you please tell our readers about Death and Taxes? Where did the idea for the script come from? What were your goals with the story? Peter K. Hassan & Elisabeth

Silverman Hassan: Death and Taxes is the darkly humorous story of IRS agent Chet Geller. Chet spends his days running down tax dodgers on the neon streets of Las Vegas. But when he’s forced to find and arrest his own deadbeat dad, things turn strange. Murderous half-man/half-cockroach thugs attack Chet, leading him to realize that there are secrets behind his bizarre, tragic childhood. Ultimately, it’s about a dysfunctional family reuniting and working out their issues, filtered through a mélange of genres- noir, sci-fi, monster movies. Our goal was to tell a cool, crazy story, but to give it a deeper resonance by keeping the characters rooted to emotional truths.

BlueCat: What did being named a BlueCat finalist in 2009 do for the script? For your writing in general?

PKH & ESH: Becoming finalists was really exciting for us. Spec scripts are written in a vacuum, and it’s easy to question your sanity for even trying to pursue a career in writing… this was a huge validation and it motivated us to keep going.

BlueCat: When you stage a table reading of your screenplay, what do you hope to take away from the experience?

PKH & ESH: When you’re deep into writing a script, it’s easy to forget that the point of the thing is to be a movie– the circuit isn’t complete until it gets performed in front of some kind of audience. The table read reminds you of that, and gives you the added pleasure of watching your characters come to life. It can be a valuable learning tool – you can see what plays and what doesn’t, where you’re giving away too much, or saying too little. The table read of Death and Taxes was an energizing experience. We were pleased by how well the humor went over, and by how invested people got in the story. Also, the reactions and comments of the people in the room were interesting and gave us fresh perspectives on the work.

BlueCat: How did you put together the table reading?

PKH & ESH: Persistence – lots of phone calls and e-mails. The Philadelphia Film Office was instrumental in helping us hook up with a casting agency. They did a superb job, and found us a terrific group of actors who were focused and enthusiastic.

BlueCat: As a BlueCat Finalist, what advice do you have to those writers thinking about entering the competition?

PKH & ESH: We’d highly recommend it. It was a great experience for us. The feedback you get is really valuable and was essential in helping us hone in on areas of the script that needed work. Our advice is to be open to criticism. Screenwriting is deceptively complex, and there’s always room for improvement.