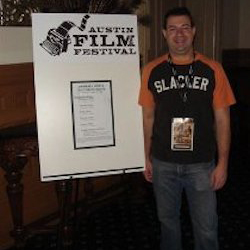 Every time I go to Staten Island something bad happens…

When a Latino ex-gang member finds an identity in the Manhattan art school world, his brother’s criminal life proves to be a deadly distraction.

Today’s interview is with 2007 BlueCat Finalist Irin Evers. Irin is an accomplished writer, having won or placed in 41 major screenplay contests, winning more than 90 awards in competitions such as the Nicholl Fellowships, the Sundance Lab, and the Austin Film Festival. Irin has also made a number films, which have been screened at numerous festivals, winning five awards. He has found work in film in various capacities including time as a script reader, in film development, and in production. His current writing projects include a family adventure screenplay and a family fantasy screenplay, written with John Barlowe. You can more information about Irin Evers and his projects at NeuroticBoyProductions.com. (EDITOR’S NOTE: A MovieBytes registration is required to view the discussion topics Evers refers to below. Registration is free.)

BlueCat: When did you first enter a screenwriting contest? What were your feelings when entering for the first time? What were the results?

Irin Evers: I think I started entering screenplay contests around 2004 with my 3rd feature screenplay. I didn’t place in any of them, but a handwritten “very close” on my Chesterfield rejection was very encouraging. I vowed to make it in the following year, but my luck, the Chesterfield never happened again. Then my 4th script (“Yard Sale”) was my first script to place in a feature screenplay contest – it was a Quarterfinalist in the 2005 PAGE International. It took another two years until one of my scripts (“Every time I go to Staten Island something bad happens…”) placed in the top few when it was in the Top 5 of 2,400 in the 2007 BlueCat. That was a huge moment for me. That script also placed in the Nicholl and the Sundance Screenwriting Lab. Then it took another year or so until I won a contest and I’ve had that luck several times now. Overall, I’ve won or placed in 41 screenplay contests for 94 awards. Contests are an excellent way to judge how your scripts fare against other aspiring screenwriters. I may not have continued without this encouragement, so I’m grateful. I’ve made connections from the contests and gotten reads. Contests are a great thing. But not all contests. Writers need to choose wisely which contests to enter.

BlueCat: In recent years, the number of screenplay competitions has increased dramatically. What advice do you have to offer writers in regards to selecting which competitions to enter? What should be the criteria for choosing?

Irin Evers: Lately I’ve been saying as often as I can that we writers need to enter the contests that help us and stop supporting the ones that don’t. I’ve started a thread (“2010 Contests to Enter & Why“) on moviebytes.com about this and I’m going to list the contests where I’m entering my new drama script. And I’m looking for other writers to give their opinions as well. We need to help each other. I think there are 3 reasons to enter a contest: 1. Get read by the industry: The most jaded will say Nicholl is the only one that fits this bill, but there are other contests that have good sponsors and connections that will read you script if you place in the top few (not as many interested parties as Nicholl and not as deep into the placing scripts, but they still may be worthwhile). 2. Labs, retreats, festivals: Some prizes include networking opportunities (Sundance, Cinestory, Austin, etc.) that are well worth attending if you manage to get accepted. Don’t be fooled by some of these festivals that charge you for your ticket, have no industry in attendance and don’t help you at all. Other than these prizes and what I mention in #1 and #3, all other prizes are basically worthless in my opinion. They’re good to take if you win them, but not worth entering “for” – as in, this is all you get. Money – always good, but you get better odds in Vegas. Inktip, e-query services, etc. – you may as well just pay for them instead of entering the contests. Final Draft – if you want to be a tennis pro, you don’t enter a contest to win a racquet, you buy one. This is the only “equipment” you need to write (though I use Movie Magic). So either buy it or use a free one (Celtx), but don’t enter a contest because you need it. 3. To make a connection with someone: You might enter BlueCat because you’ve written a script like “Love Liza” and think Gordy Hoffman will appreciate it. You might enter a script about Springsteen to Champion because you know Jim Mercurio is into him. You might enter Monterey (if it starts up again) because your script is set in Monterey and they might champion it. Local film festivals may champion your script and help get it to the right people. I know that a script with Asbury Park in the title just won the Garden State Film Festival. All of these things and similar ideas are worthwhile and smart. Enter contests that play to your genre, location, social issue, etc. (as long as they can help you in some way). Someone suggested that I add feedback to this list. I don’t usually pay extra for feedback, but if you find contests that have worthwhile feedback (and you know you’ll get the same or a comparable reader), then that’s fine too. I personally spend that money on two script analysts that I’ve worked with for a long time. Research the contests, check their history, ask around, get more than one opinion. You’re spending hundreds of dollars on this. And then please only support the contests that will help you.

BlueCat: With the increase in competitions, some writers may feel that they are the best way to get their screenplay out there. What are your thoughts?

Irin Evers: There’s no magic bullet. The right contests are worth entering, but you have to approach this from as many angles as you can. I spend more time managing my career and educating myself than I do writing. Take control of your career rather than just waiting for contest results. Manage your career: research and submissions; update your website and social networking sites; keep up with contacts; post (and read) on boards (Moviebytes, Done Deal Pro, etc.); queries; cold call to agents, managers and producers to pitch; post and reads scripts online (Triggerstreet, Zoetrope); read friends’ scripts; attend festivals and events; etc. Also educate yourself: read screenwriting books and magazines, scripts, blogs; watch films. My wife might say some of these things are procrastinations, but as long as it’s script or film related, I think it’s very helpful. I’m also a big believer in making films. I know it’s a difficult undertaking to say the least, but it really helps your writing in so many ways and you may love directing.

BlueCat: In recent online writing communities, you have taken part in discussions in regards to the need for screenwriters to share their experiences with screenplay competitions. What do you hope to accomplish by taking part in such discussions?

Irin Evers: We definitely need to help each other to know which are the contests worth entering and the ones that are a waste of money. I’ll be open and honest in my moviebytes.com thread. I’m sure I’ll piss off some contests, but I figure that those are probably the ones not worth entering anyway. I also want to make sure that I enter the right ones. I remember reading how Telluride IndieFest was a more indie alternative to Telluride, taking place at the same time (a la Slamdance/Sundance). I entered and months later, received a call from the police getting information about this scam of a festival/contest. On the opposite end – after I won Best Short Script at the 2008 Queens Film Festival, I met my future collaborator at the after party. Advice at the 2008 Austin Film Festival plus queries mentioning my contest wins led to me landing an agent. I’ve also made connections and gotten reads from the contests and festivals.

BlueCat: What are your thoughts on “contest burnout?”

Irin Evers: Gordy Hoffman once told me to get out of the contest mentality. By this, I think he meant to approach it from many angles (as I mentioned above) and to start calling people to pitch on my own. I need to do more of that. I’ve made mistakes in the past in choosing which contests to enter. I even had a “contest addiction” – as you can see by the fact that I’ve placed in 41 different ones. But I’m not going to make those mistakes again and I’m trying to get this information out there. Is your goal merely to win contests or to sell scripts and get your films made? If it’s the latter (which it should be), you need to do things to achieve that goal – so entering contests only and/or entering contests that don’t help with that are both not helping you achieve your goal as best you can.

BlueCat: What does the future hold for you in terms of screenplay competitions?

Irin Evers: Follow my thread on moviebytes.com and you’ll see the contests I’m entering and why. I’m sending out an indie drama so you might have different contests to enter due to a different genre and with your different goals. But think twice about each submission and what you will/can get from it. And please let me know what you think and your recommendations. Contests are also welcome to let us know their successes. I can be contacted on my website neuroticboyproductions.com. Good luck!