When two former dancers inherit their childhood studio from their eccentric dance teacher, their clashing visions unearth their adolescent dynamic as sworn frenemies.

Haley is an LA-based writer who recently earned her MFA in Writing for Film and Television at Emerson College. She also has a bachelor’s in Business Finance, but still can’t do mental math. Prior to moving to LA, she was a cast member at ImprovBoston in Cambridge, MA. In addition to her finalist placement at BlueCat, her writing has been recognized by the Austin Film Festival, Script Lab, and Final Draft Big Break screenwriting competitions.

The intention of every story I write is to explore the complexities of female friendships and experiences. The main characters are often antagonists who end up needing or relying on each other. We live in a culture that poises women to compete with and challenge one another, but it’s important to remind ourselves of the power we attain when we band together. 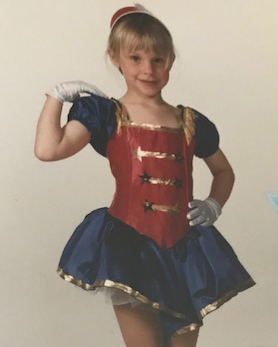 All Turned Out is a story ripped straight from the pages of my childhood growing up as a dancer. They always say to “write what you know,” but for years, dance was filed in my brain’s “absolutely not” folder. The reason was simple- I couldn’t fathom giving dance another minute. From the ages of four to eighteen, I spent almost every day in the studio with my dance teachers and teammates. If I wasn’t in class, I was at home practicing. Dance was my world, and like any “first true love,” I was a little too obsessed. By the time I finished high school and came to the devastating realization that I wouldn’t build a career on the stage, I was ready to move on. It’s been years since I stepped inside a dance studio, and I even convinced myself that I didn’t miss it- until I sat down to write this story. All Turned Out is a love letter to any artist who has ever been both enamored with and pained by their art. It’s a reminder of why we dare to dream and create, even when doing so can be incredibly difficult and complicated.