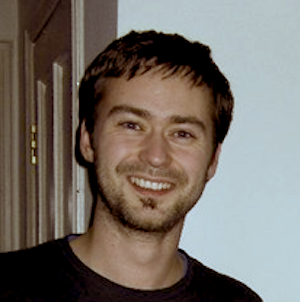 In his small, isolated cottage, Alexander finds a very unusual trumpet that will turn his lonely existence upside down.

I grew up in Dublin, Ireland but I’m now based in London. I’ve been a writer of sorts for as long as I can remember and have been in love with movies since I was very young. After school, I completed a law degree then worked in music but two years ago I decided to pursue my passion for film. I applied and was accepted into The London Film School where I completed an MA in Screenwriting. LFS opened up a new world for me. I met and learned from some great screenwriters and filmmakers there and began to learn how to better transform the stories in my head into screenplay form.

Just before graduating from LFS I was hired by Ireland’s national broadcaster, RTE, to write 7 mini episodes for a children’s TV show, currently airing. Earlier this year, I won a competition in Ireland run by an organisation called Filmbase. For the shortlist interviews I joined forces with a great young production company called Tidal (tidal.ie) and the talented up and coming director Stevie Russell. My script “So It Is” was awarded €10,000 in funding. Filming of this project is due to begin shortly in Ireland.

I’ve been dreaming up stories of all kinds since my parents gave us carte blanche to write and draw on our bedroom walls as kids. That freedom and encouragement to pick up a pencil or a crayon or whatever and just create was a huge thing for me. Books were a massive influence too. We were read to all the time when we were younger, and I became an avid reader early on of authors like Roald Dahl and C.S. Lewis.

My love for film began with all the old Disney movies. I remember watching movies like Peter Pan and 101 Dalmatians as a kid over and over again, sitting there, completely glued to the screen. I was hooked from a very early age.

My parents say now that they always knew writing was the thing I’d end up doing. It took me a while to fully realize that but I think they’re right. I have stories inside my head and a fascination and love for cinema. A merging of the two just seemed right.

Trumpet is a fantasy drama about a lonely man called Alexander who finds an old trumpet hidden in his isolated cottage. He soon discovers that whenever he plays a note on the trumpet, amazingly, a ‘visitor’ appears in the room with him. The visitors are an eclectic mix of all sorts of characters from all time periods etc. But there’s a catch. As soon as each visitor has uttered a sentence, they vanish.

Initially, Alexander is enthused by some brief human contact and intrigued by some of the unusual things they say. He begins to take Polaroid’s of the transient visitors and sticks them on his wall. He tries his best to get the visitors to refrain from speaking so that they don’t vanish immediately but this turns out to be an impossible task.

As the months pass by and the Polaroids cover the walls, Alexander begins to grow bored and disillusioned, until one day, when everything changes. Alexander blows the trumpet and a girl called Anna appears. And for once, she doesn’t say anything.

After lots of initial confusion, Alexander works out that the reason Anna doesn’t talk is that she is mute. Thus, unlike the others, she cannot talk and thus, does not disappear.

Following a nervy start, Alexander gets to know Anna and over the weeks, gains her trust. They fall in love and everything is better than it has ever been. Then one day, disaster strikes. Alexander and Anna make love and just as Anna climaxes, overcome with pleasure, she shouts out, ‘speaking’ for the first time, and of course, vanishes.

Suddenly, Alexander is plunged back into his lonely, depressed world. He runs around desperately screaming Anna’s name. He stands there for weeks on end blowing the trumpet over and over, trying to summon his love back to him. But she never reappears.

Broken hearted and driven to despair, eventually Alexander decides to end it all. He stands on a chair with a noose around his neck. Before he topples the chair, he takes out the Polaroid of Anna from when she first appeared for one last look. He brings the photo to his lips and just as he topples the chair, suddenly, he himself vanishes.

Moments later we are in another room. Just then, Alexander appears. Startled, he looks across the room. His eyes widen as he sees Anna sitting in the far corner. She has a trumpet of her own. With tears in her eyes she has her finger up to her lips to say ‘shhhh’.

How did you think of the idea that when the characters were done speaking, they disappeared?

Trumpet is largely about real human connection and communication for me. The characters in Trumpet disappear like the girl you see on the Underground but never say anything to. As you pass through stations, sharing flirtatious glances with one another, you start to imagine what she might be like. You dream up what it would be like if you approached her and you hit it off. You picture telling your kids how a chance meeting on the Underground led to everything. But in the end you don’t say anything to her. She hops off at the next stop, disappears into the crowd and you never see her again.

I wanted Alexander to experience a taste of human contact, something he had been without for so long that he had probably forgotten what it feels like. With the transient visitors I wanted him to feel that forgotten sense of human connection but without a real interaction forming. Before long, merely being around these visitors for short moments was not enough. He needed more, some meaningful human connection.

You chose the trumpet to be the center of the screenplay, have you ever played the trumpet?

I have attempted and failed to play the trumpet. I used to work in a recording studio so I had the chance to try to play a beautiful trumpet once. It’s a lot tougher than it looks!

To me, the trumpet is one of the most beautiful instruments. When it’s played just right, it has this incredible ability to be so expressive. It’s like it’s really talking to you. I love players like Miles Davis, Dizzy Gillespie and Louis Armstrong. Those guys could play a trumpet and it would just sing and sound like they were really saying something to you.

So the selection of the trumpet was loosely symbolic of one of the underlying thoughts in the film, the idea that true communication does not necessarily require words.

Was Anna deaf from the beginning? Or did she not want to speak so she would not disappear from Alexander?

This is only my take on it. None of this is explicitly in the script so it’s open to interpretation. I hope if Trumpet ever gets made there are things in the film that I have left ambiguous enough so that the audience will think about certain aspects after they have left the cinema. That would be great.

If you were to continue Alexander and Anna’s story, how do you see it unfolding?

In its current form, Trumpet leaves it up to the audience to ponder how life might turn out for Alexander and Anna. Potentially though, all sorts of interesting things could happen to them if the story were to continue. Maybe I’ll look at writing that script some day!

I think the end sets up an interesting new scenario. Alexander has been reunited with Anna but in the new place neither of them can ever speak again. Hopefully this is thought provoking in some way. It harks back to the ideas about human communication.

Since I graduated from LFS in December, I’ve been working hard to finish drafts of numerous shorts. I’ve begun entering these into competitions to try to secure funding to get them made. I’m really keen to direct my own films but for now, I’m writing some really short, micro budget stuff so I can get behind a camera and give directing a go. I’ve got numerous feature film ideas too but I’ve had to put them on hold for the time being while I concentrate on getting some of my shorts made.

Something else that I’m just beginning is an exciting project with a talented photographer in London. An interesting synthesis of photography and short storytelling.

Other than that, I’ve been writing some short animations lately. A few months ago, an animator friend of mine approached me to write something for him and it started from there. Animation is a very exciting prospect for me. I love the freedom of being less restricted by things like locations, casting issues and other budgetary constraints. Suddenly a whole realm of possibilities opens up and that suits my writing style. I like letting the imagination run wild. I think people enjoy being taken on an unexpected journey.