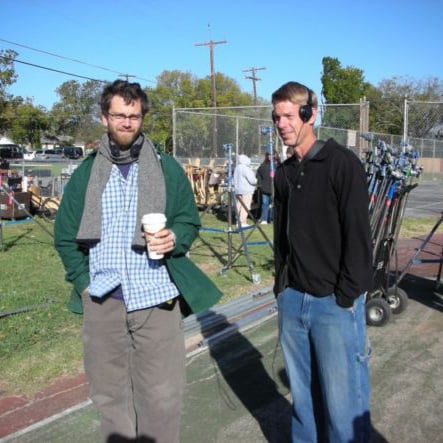 An ethically challenged Rod Laver worshipper moonlighting as a custodian finds himself in charge of the high school tennis team, only to throw down the singularly most unorthodox coaching performance in the history of the game. 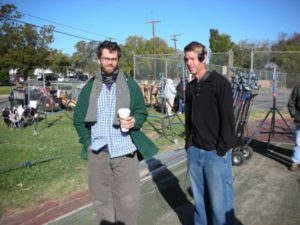 How did you guys meet?

Rick: We were around eight-years-old when we met at a tennis tournament in Grand Island, Nebraska. We’ve been friends ever since.

What movies do you feel influence your screenwriting?

Where did the story idea for GARY THE TENNIS COACH come from?

Andy: Rick works as the assistant men’s tennis coach for the University of Nebraska. He’s always getting these video tapes from high school players who want to play college tennis for Nebraska. We were bored one night and decided to film a fake application tape to mail to Rick’s boss. We got our friend to pretend to be an unusually motivated high school netter. The tape started out normally, but then got more and more bizarre as he filmed himself doing odd exercises and recounted problems he encountered on the Mexican tennis tour. The video started getting passed around and people seemed to get a kick out of it.

Rick: Yeah, that video was probably the birth of our “GARY THE TENNIS COACH” main character, Gary.

How did you go about writing the script? What’s the writing process for your creative partnership?

Rick: Once we decided to write a screenplay, we wrote down about 20 scenes that made us laugh. The key was that they had to make us laugh out loud, which takes a lot. Andy went back to Boulder and wrote four or five scenes with dialogue and e-mailed them to me. I added a couple of scenes, e-mailed them back to him and we were on our way. Again, the idea was to make each other laugh. I was his audience and he was mine.

How do you resolve your differences?

Rick: A key for us is that we have similar notions of what is funny and what is not funny. It is pretty black and white to us. In that regard, we really haven’t had too many differences.

Andy: I honestly can’t think of single time that we had a significant disagreement over what should or should not be in the script. It almost seemed like elements of the script just kind of appeared and disappeared on their own.

What were your original goals for the script?

Andy: Our original goal was to sell the script and put ourselves in a position to scratch out a living by doing something we love.

Rick: I’m sure every screenwriter would like to see his or her work on the screen. That’s what I’ve always wanted for GARY THE TENNIS COACH.

What were the initial reactions to the screenplay?

Rick: At first, we did not have any reaction to the script. It was as if we were mailing it out into a black hole. That is why we were so excited to hear about “Bluecat” because we were guaranteed feedback. And from watching LOVE LIZA, we also thought that Gordy might “get” our script. Thank God he did because at one point we were actually considering trying to film it ourselves. Of course neither one of us had a clue about how to go about doing that. We enjoy, and hopefully have some knack for writing — but trying to film it ourselves would have been a disaster.

After you won BlueCat, your script got the attention of a producer named Peter Morgan. What happened?

Andy: Peter called me and said that he loved the script. However, he’d let me know that there was plenty of work that needed to be done on it. So, we got to work. We took the feedback we got from Gordy and the Bluecat Screenplay Competition, combined it with Peter’s feedback, and started re-writing. After re-writing the script, we were exhausted. Little did I know that we were going to have to continue re-writing the script for the next three months. We learned pretty quickly that a screenplay is more like a poem than a novel. Every line has to have a purpose: It has to further the plot or make the reader laugh — and hopefully both.

You guys got signed by United Talent Agency. How did that happen?

Rick: After finishing the re-writes, Peter showed the script to Tracey Jacobs at UTA. She was on vacation when she read the script, but she called us from Hawaii and wanted to represent us. We immediately agreed, as we could tell she was enthusiastic about our script and our futures. From there, Tracey brought on board Charlie Ferraro, Barbara Dreyfus, and Jeremy Zimmer to fill out the rest of our UTA team.

What’s the current status of the script?

Andy: We’re in the process of getting it packaged with a star and director. Once that is done, the agents, producers and attorney will send the script out to studios. In a perfect world, it will sell, be filmed and be in theaters by next Christmas!

What are you working on now?

Rick: A producer by the name of Kevin Messick had heard about our script and got a hold of copy. He thought the tone of it was perfect for a story he had been thinking about for a few months. He contacted Peter and Peter’s boss, Michael Nathanson. They decided to team up and they called us and told us about the story idea. We thought it was a great idea for a movie, so Andy and I are in the beginning stages of working on that script.

Where do you want to be in five years?

Rick: I hope we will still be writing screenplays. We now have our foot in the door, and that is all that we ever asked.

Andy: If five years from now Rick and I were making a living by doing what we love, I would be very pleased.