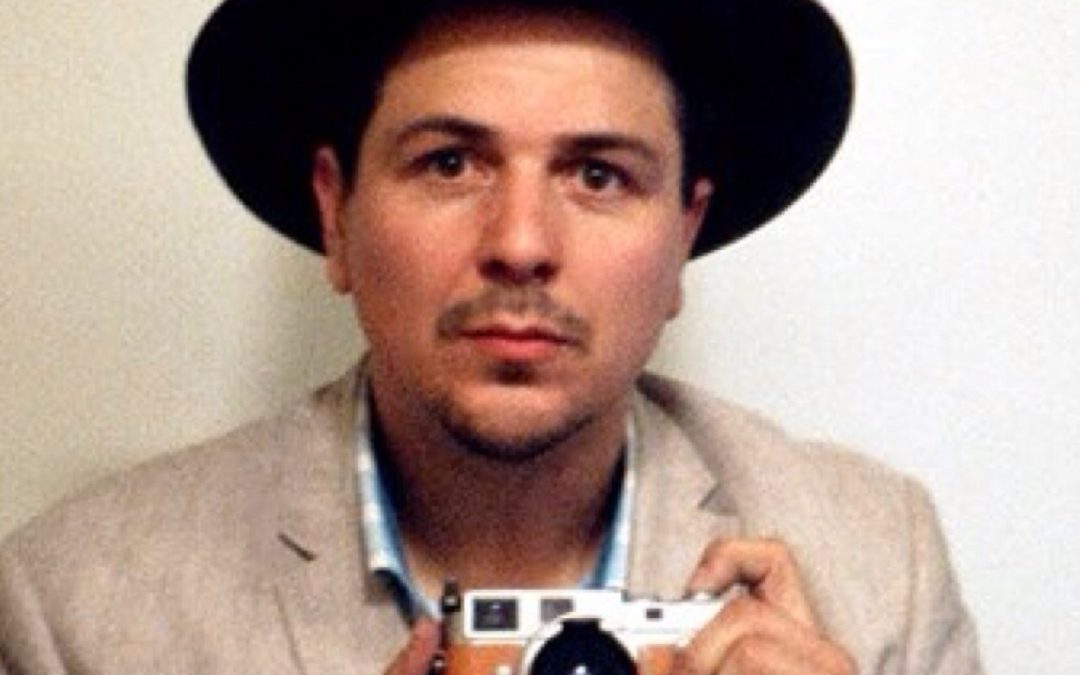 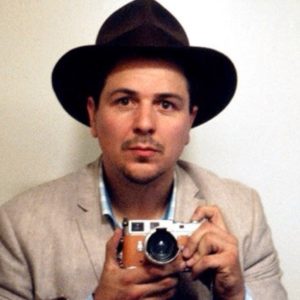 Today’s interview is with one half of the grand prize-winning pair of writers behind The Man in the Rearview Mirror, a story of a man, his wife and mother-in-law in pursuit of a suspected kidnapper on the Eisenhower highways of the 1950’s, brilliantly recalling the Hitchcock classic, Rear Window, at 90 miles an hour.

We recently took some time to catch up with Andy Pagana and see where his filmmaking career has gone since his days with BlueCat. The 2004 BlueCat winner now has a big-name director attached to his script in Peter Bogdanovich. Additionally, Andy has been keeping busy with two television shows: one for the Kabillion on-demand network, and one for PBS. If that wasn’t enough, Andy has also started a movie review show on YouTube.

BlueCat: Let’s start where it all began. Tell us about The Man in the Rearview Mirror. What happened after winning BlueCat?

Andy Pagana: We wrote another script immediately but it was a Western and nobody wanted to touch it. As for Rearview, it was optioned immediately and it sat around for a while as the producer waited to get funding. Basically, nothing happened. Eventually that option ran out and then we won the Austin Film Festival. It was then optioned again but it was changed so much, and that caused me such heartache, that I decided to give up writing. I went and directed some children’s television instead and then formed a production studio with some other guys.

BC: So you won BlueCat in 2004, and here we are in 2011 and Peter Bogdanovich is attached to your script as a director. What happened in those years between these events? For our readers’ knowledge, could you describe your screenplay’s journey to where it is now? What kinds of ups and downs did you experience?

AP: We won BlueCat and the script was optioned almost immediately by a small producer that we thought would do something with it. It sat around I think for nearly two years with no news. We then entered in the Nicholl Fellowships and placed in the top 100, and then won the Austin Film Festival. Right after the Austin Film Festival it was optioned again, by a different producer. We’re still in that option now. We had a different director attached at first, and a legendary star (who I probably shouldn’t name at the moment) joined on and we were convinced it was only a matter of time. Now, as these things go, the original director was no longer part of the project and the producer managed to land Bogdanovich, who I couldn’t be more excited to have. I’m not sure how to describe the ups and downs. I’ve had more downs that ups I hate to say. In fact, it had stopped me from writing for a few years. But I really should leave it at that because I have gotten myself in lots of trouble by opening my mouth.

BC: What was your reaction when you found out that Peter Bogdanovich was attached to direct? AP: Well, I was really excited and impressed that we got him. I love that guy. He’s classic Hollywood. Heck, he knew Hitch and Welles and Ford and he is Hollywood royalty! To have my name on the same poster that he is on will be a kick.

BC: In the position that your script is in, what kind of involvement do you have with the project at this point?

AP: This is a very hard question to answer because it could be bad for business. And I hate that because privately I can go on and on about this. I never thought I’d be the kind of guy that would keep quiet, but like I said I have gotten myself in trouble with the things I say. What I will say is this… I have a very honest and open relationship with the producer that owns the option, and I am kept up to date on all progress. In one way or another I have been involved in most aspects of the development. And I anticipate being part of the production process if the film gets made.

BC: What were your original goals with the script?

AP: I wrote it to direct it. But I didn’t stick to my guns when the optioned was offered. I regretted it then but have let it go now.

BC: What do you finding most challenging about writing a screenplay?

AP: For me, it’s just focus… making the time to do it… making it a priority. There’s so much I am interested in and I will work on multiple projects at one time. The second challenge for me is that when I get stuck I don’t write through it. I move onto a different project and I let it simmer. So, unless I NEED to get something finished, I don’t.

BC: What were your expectations in entering the 2004 BlueCat Competition?

AP: I didn’t have any because I didn’t even know I entered. My writing partner Justin entered and didn’t tell me. I didn’t know until Gordy called to say we won. Justin entered just to get feedback. It was our first screenplay together and I think he just wanted to see what someone else thought of it.

BC: What is your writing process, in terms of taking a concept from an idea to the written page? AP: It’s all intuitive for me I think. I don’t outline. I don’t write treatments. I sit down and write. I start with an idea… whatever idea strikes me. Very often, it’s just a visual or line of dialogue. I go to breakfast and write eight or ten pages (or whatever), until I run out of steam. The next morning, I print them out, reread them, make corrections and write again until I run out of steam. I rarely force myself. Then, if I do that every day, I end up with a screenplay. I will often takes notes on ideas, lines of dialogue, shots, etc. And see where they fit in. Basically, I just think to myself, “Okay. I’m in the movie. What am I seeing?”

BC: How did you first become interested in writing?

AP: Well, the truth is, I didn’t. It was a means to an end for me. I don’t consider myself a writer. I wrote The Man in the Rearview Mirror to have something to shoot. My goal was to direct and so I needed something. There was so many crap screenplays out there I was like, “Well, I can write just as bad as these guys” so I wrote. And then I kept writing because I couldn’t afford to make the movies I wanted. So I would make them on paper, basically. In fact, growing up it was a goal of mine NOT to write what I directed. Hahaha!

BC: Are you still writing feature screenplays?

AP: I have let the feature screenwriting drop because Hollywood treats the screenwriter like garbage. Yet the screenplay is king in my opinion. Recently, I have been asked to write two features, one for a major Hollywood player. It looks like I will do it. On my own, I write as things strike me so maybe I’ll pull another spec screenplay out of me. I have lots of ideas…

BC: Are there any writers or directors that influence you?

AP: Nobody has influenced me more than Laurel and Hardy. Even when it comes to suspense and tension, nobody is better than Laurel and Hardy. Talk about anticipation!! Most of my stuff is not comical, but the way I build conflict comes directly from them. Also, Stanley Kramer’s It’s a Mad Mad Mad Mad World.  I think one of the most brilliant screenplays of all time. There are fourteen main characters and each one is not only completely different, but you know who they are the moment you see or hear them. It creates the perfect amount of back story with such minimal lines. Then, in general, there’s the usual… Welles, Lean, Ford, Chaplin and Spielberg.

BC: What new projects are you currently developing? AP: The Nonsense Box is an ongoing project. I hope to do it forever. We just released an album on iTunes and I want to go heavy into production on full-length 22 minute episodes. I also have a feature idea for it. I’m doing an ongoing web series called Schwartzy and Pagana’s Amazing Motion Picture Review Show where Schwartzy and I review movies in our comedy team characters. We have lots of plans for these guys. I wrote a black and white silent comedy that I am determined to do and I’m producing an action movie called The Devil’s Ink at Cosmic Toast Studios. As for projects at Cosmic Toast that I’m involved in, there’s way too many to mention. BC: How has your writing evolved since winning BlueCat?

AP: I don’t know if it has. I don’t really know how to evaluate that. I just make things up as I go and the process doesn’t seem any different than it did to me when I was a kid. I’m probably more fearful if anything… and that’s NOT a good thing to be.

BC: You have an album on iTunes, a PBS show (Slangman’s World), a show for an on-demand network, an animation studio and a YouTube series. How do you maintain a balance of your time between all of your projects?

AP: I don’t sleep much. I run around racing the clock like I’m Marty McFly. I find a whole in my schedule and fill it. Also, I have lots of help. I have the greatest business partner in the world in Kenny Gage. He’s a can-do, nothing is impossible guy. He backs me on everything, helps me with everything and is filled with advice to make everything better. Justin Thomas, my feature-writing partner is tireless and hard working and knows how to keep us focused. He can write more in a day than I can read. The guy is amazing. Then there’s Schwartzy, with whom I do what some would call “comedy” shorts. He does tons of the work. I just nag him to get it done.

BC: As someone that has achieved success in screenwriting and production, what advice do you have to BlueCat competitors?

AP: I don’t have much. Whatever I say today I could say completely opposite tomorrow. The only exceptions so far are: Have balls when you write and be careful what you sign. Our thanks go to Andy Pagana for taking the time to chat with BlueCat. Once again, Andy Pagana and Justin Thomas are the duo behind The Man in the Rearview Mirror, our 2004 Grand Prize Winner.

In this interview, Andy Pagana talks about how his professional career began with BlueCat.

His winning script, MAN IN THE REARVIEW MIRROR, went on to become a 2004 Nicholl Fellowship semi-finalist, and was named winner of the 2006 Austin Film Festival Heart of Film Screenplay Competition.