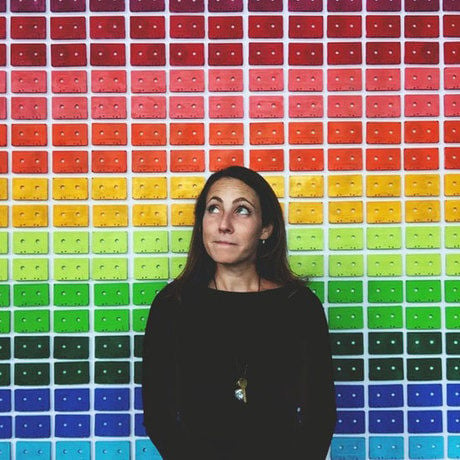 “Script Frenzy is an international writing event in which participants take on the challenge of writing 100 pages of scripted material in the month of April. As part of a donation-funded nonprofit, Script Frenzy charges no fee to participate; there are also no valuable prizes awarded or ‘best’ scripts singled out. Every writer who completes the goal of 100 pages is victorious and awe-inspiring and will receive a handsome Script Frenzy Winner’s Certificate and web icon proclaiming this fact.” –(ScriptFrenzy.org)

BlueCat: Where did the idea for Script Frenzy come from?

Jennifer Arzt: From running NaNoWriMo, we’d seen that all it takes to transform a book-lover into a book writer is a deadline and a supportive community. We’d also seen that the process of writing a book can completely change people’s perceptions of themselves.  Once you discover that you can write a passable novel draft in 30 days, you start to wonder what other things you’re capable of. It opens doors that lead to some really interesting places. We knew that scriptwriting could also work as a similarly great springboard to creative exploration, and the length of a standard script made it an ideal fit for a month’s labors.Unfortunately, we found that people who loved movies or plays shied away from penning scripts because they mistakenly believed it took months to learn the formatting rules (or hundreds of dollars to buy expensive software). We thought that running a sort of anti-contest writing contest along the lines of NaNoWriMo but focused on movies and plays could help everyday people just dive into the creative process. When we asked NaNoWriMo participants what other kinds of things they would like to write, happily movies and plays were at the top of the list. And thus was Script Frenzy born!

JA: It was great! At that point, NaNoWriMo had about 50,000 participants and we had achieved a reasonable degree of stability. It was nice to get in over our heads again by doing something for the very first time. We learned a ton! The first Frenzy had a 20,000-word goal, took place in June, and only allowed screenplays and stage plays. It turns out that scriptwriters become somewhat violent when you ask them to count words rather than pages, so the following year we changed the goal to 100 pages and everyone was a lot happier. June also turned out to be a tough month because it was the cusp of summer, students were on vacation, and the writerly mojo was low. We also got a lot of emails from folks who wanted to write long TV shows and graphic novels scripts who felt left out of the Frenzy. So we broadened the event’s reach in 2008 to include all kinds of scripts. We haven’t looked back since.

BC: What kind of feedback do you receive from Script Frenzy participants, in terms of what their participation accomplished for their writing?

JA: A couple things seem to come up time and again. I’d say the two biggest comments are about the motivating deadline and the habit of writing daily. The deadline is set by us, an external force. We start on April 1, no matter what. There is no wiggle room given and no excuses taken. Either you’re in or you’re out. I think that the finite quality of an externally set deadline and the rush (or pure fear) of missing it works as an incredible motivator for so many people. The ticking clock of a timed writing event also gets folks writing everyday. (The easiest way to write 100 pages in 30 days is to consistently write 3.3 pages a day.) We hear so many stories from our participants about how easy it is to say no to invitations because they are taking part in Script Frenzy and need to write. I think it gives legitimacy to writing. The habit of writing every day gets formed in April and continues through the rest of the year.

BC: What can you tell us about your Young Writer’s Program and its goals?

JA: Script Frenzy’s Young Writers Program offers a kid- and teen-friendly version of the main program to budding writers and educators. The YWP site allows young writers to set reasonable page-count goals for their age/grade, and provides them with grade-appropriate scriptwriting boot camps and corresponding downloadable workbooks; our program sets out to teach students everything they need to know about scriptwriting, from plot development to script formatting, before April 1. For teachers, we’ve developed three tracks of California State Standardized lesson plans: one for elementary, one for middle school, and one for high school. These lesson plans are also offered for free, and correspond with the boot camps and workbooks. Our goal is to offer excellent writing resources to both teachers leading their students through the Frenzy and to kids and teens participating on their own. We believe that the younger you are when you learn that writing can actually be fun, the better! Not only does our program change the way students feel about writing, Script Frenzy also teaches them that even the most daunting goals are achievable. This April we’re expecting over 2,000 kids and teens to write with us, making it our biggest year ever!

BC: Script Frenzy seems to have a very grassroots feel. How do you maintain the sense of community within Script Frenzy and its participants?

JA: I think we feel grassroots because we are grassroots. I wish that we could take all the credit for the sense of community, but the community really takes on a life of its own. When people start writing with a common goal, they reach out and connect with others. Writing is often such a solitary activity that having a team of folks who, though they may not know your story, can commiserate with the experience. I have to give much of the credit to our Municipal Liaisons. They’re the ones on the ground who bring local participants face-to-face. We really couldn’t achieve the same sense of community without them or their amazing leader here in the office, Lindsey Grant.

BC: From year to year, what do you hope to achieve with Script Frenzy? In the next five years? JA: Heading into our fourth year, the number of participants has sky rocketed and the core demographic has shifted. In our first year, there were a good deal of writers who came over from our sister event, National Novel Writing Month. In the second year, we really saw a huge influx in scriptwriters. Since then, the number of participants who write exclusively scripts (versus novels) had continued to grow. Year after year, I hope to continually focus Script Frenzy’s free resources to our specific pool of participants. My goal is to refine the event to meet the needs of an ever-changing group of writers. There are so many new and exciting ideas in progress! I wish I could tell you all about them now, but then I’d have to… well you know the rest of that line. It is all very exciting! Stay tuned!

BC: Do you participate in the Frenzy every year?

JA: I do! Some years I end up with a better first draft than others, but I always take part. And I look forward to it every year. As Program Director I have so many people holding me to the goal. It is both wonderful and terrifying. I haven’t started outlining for this year’s script. Eek. I need to get going!

BC: What do you do in Script Frenzy’s off-season?

JA: After Script Frenzy this year I’ll be working to get my first feature film off the ground. Since film school, I’ve been dying to get back to directing. And, if all goes well, I’ll get my first feature moving forward. If you know anyone who has a few million bucks they want to invest, please have their people call my people.

BC: If you didn’t have Script Frenzy, what would you be doing?

JA: Tough question! I’m really not sure. As soon as I found Script Frenzy it felt like a perfect fit. I got right down to business and haven’t looked back.

BC: Do you have any funny Script Frenzy-related experiences to share? JA: Funnier than how bad some of my dialogue was last year? I don’t have any great funny moments, but I do have an embarrassing moment I can share. Please laugh at that stuff, right? Last year, during my speech at the Kick-off Party, I slipped and fell down three stairs. That was “funny.” I really wanted to get one of those, “I do all my own stunts” t-shirts after that.